“Afterwards, as I have suggested, I was to discover in Miss Moonbeam an almost incredible capacity for evil.”

A piece in an magazine tipped me to this one, an extraordinary (and obscure) work of fiction in the spirit of Jerome K. Jerome and P.G. Wodehouse. If you buy the newest edition, ignore the cover. Obviously neither the illustrator or the editor or the publisher actually read the book, or they would have noticed they were two centuries off.

In the February 2009 issue of Wired magazine, on pages 50-51, there is an article about the forthcoming stop-motion animated film Coraline, and the model-making that went into it. All amazing, but Coraline’s gloves truly took my breath away. They were knitted by Althea Crome, who creates miniature gloves, socks, sweaters and more via “extreme knitting” using fine wire as her knitting needles. You can, and should, see her work at Bug Knits. She’s a miracle.

I have read much about Winston F. C. Guest (1906-1982), who in his youth led Yale’s polo team to the Intercollegiate Championship, playing, in the words of Time, “polo that was fast and sportingly rough enough for international cup matches.” Guest did become an internationalist, playing for America against England in 1930, ’36 and ’39, versus Argentina in ’28 and ’32, and against Mexico in 1941. With Meadow Brook in 1932, he even won the Argentine Open, a feat unmatched by any U.S. team before or since.

… painted by no less an artist than John Singer Sargent (1856-1925). To be painted by Sargent before your first birthday constitutes a remarkable start, but Guest was just warming up.

In 1947, he married the free-spirited Lucy Cochrane at the Havana home of his friend Ernest Hemingway. Two years before, Guest’s bride (known as “CeeZee” because her infant brother could not say the word “sister”) had posed nude for Mexican artist Diego Rivera (1886-1957). The painting hung for a time over the bar in Ciro’s, a night club in the Hotel Reforma in Mexico City; the portrait was said to be horizontal, an odalisque, and probably looked something like this…

… only without the dress. When it became clear that C.Z. was to become Mrs. Guest, agents of the groom paid 15,000 pesos — about $3,000 — to the bar owner and spirited the painting away from public view.  Thus was one portrait lost but by way of consolation, Winston later commissioned  Salvador Dali (1904-1989) to paint C.Z.’s portrait, one of very few portraits ever done by the famous surrealist. 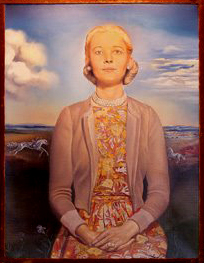 The brushwork continued. Winston himself was painted, in the company of a polo pony, by William Cotton (1880-1958), and when Winston and C.Z.’s daughter Cornelia (b. 1963) was five years old, she was painted by Richard Stone Reeves (1919-2005), the premier equine artist in America…

Cornelia Guest on Ivanhoe (circa 1969)

…and then later by Andy Warhol (1928-1987) in a rather more modern version of her mother’s Rivera portrait.

Sargent, Rivera, Dali, Warhol… all in all, an amazingly colorful and eclectic line of artists, with subjects to match.

My thanks to the Museum of Polo and Hall of Fame for the photo of Winston Guest playing in the Westchester Cup match of 1930.

“So act that your principle of action might safely be made a law for the whole world.”

As envisioned and advertised by illustrator Coles Phillips.

“I love naked women, wildlife, polo ponies and chandeliers. I have eclectic taste.”

“If your conscience won’t stop you, pray for cold feet.”

The other day, I stumbled across another Yale polo story, this one with a player named Wallop. How could anyone resist picking up that thread of history?

The story began in 1883 when Oliver Henry Wallop graduated from Oxford and went to Wyoming. This may strike you as an odd move, but he was the fifth son in a titled line, without much reason to stay home, and he wanted to be a cowboy. So he settled near his Scottish cousins, William and Malcolm Moncreiffe, in Sheridan, Wyoming, raising cattle and horses. The cousins maintained their British ties, supplying horses to the British during the Boer War (1899-1902).

One account notes that the British liked to test the horses by riding the length of a polo field, so the Moncreiffe brothers built one; having the field at hand, they taught their cowhands to play.

In 1906, Oliver Henry Wallop became a U.S. citizen and he eventually was elected to the Wyoming state legislature. But in 1922, when the fourth of his older brothers died without a male heir, Oliver unexpectedly became the Earl of Portsmouth; he was thus obligated to return to his ancestral home in North Devonshire and become the first Wyoming state representative to move over to the House of Lords.

Stateside, his son, Oliver Malcolm Wallop, went to Yale to play polo on what was surely one of the most far-flung teams ever assembled. The young Wallop was joined by Long Island’s John Henry Howard “Ben” Phipps, famous for bringing a skunk to chapel at Groton which led to his sudden enrollment at Exeter; F.C. Baldwin of Hawaii’s foremost missionary, ranching, sugar growing, polo playing family; and Hardie Scott of Bala Cynwyd, Pa., who was thrice elected to the U.S. House of Representatives, but not before graduation. Together, the four won the Intercollegiate (Outdoor) Championship for Yale in 1928.

Oliver Wallop graduated in 1928 and returned to Wyoming to ranch; his son Malcolm also attended Yale (1952-54), captaining the Yale polo team to two more intercollegiate titles. Malcolm was elected to three terms as a U. S. Senator before returning to the ranch in 1995. The Wallops are still very much a part of Wyoming. The Oliver Wallop Memorial Cup was played for this past summer at the Flying H Polo Club in Big Horn, and Oliver Matthew “Matt” Wallop, is the owner and chef of Oliver’s Bar and Grill in Sheridan. And the Wallop’s Canyon Ranch is still in the family, now open for visitors.

“Live your life, do your work, then take your hat.”

“There is in life an element of elfin coincidence which people reckoning on the prosaic may perpetually miss.”

— G.K. Chesterton in “The Blue Cross”