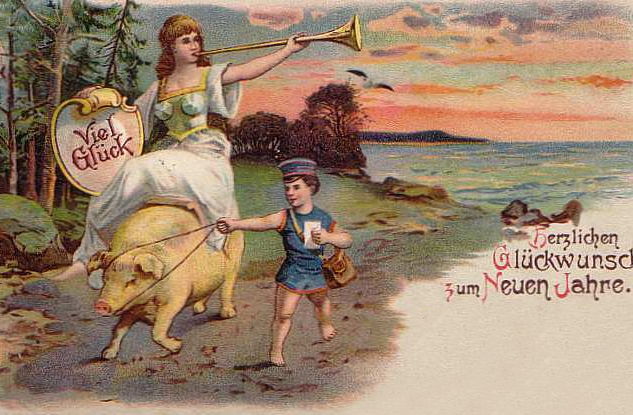 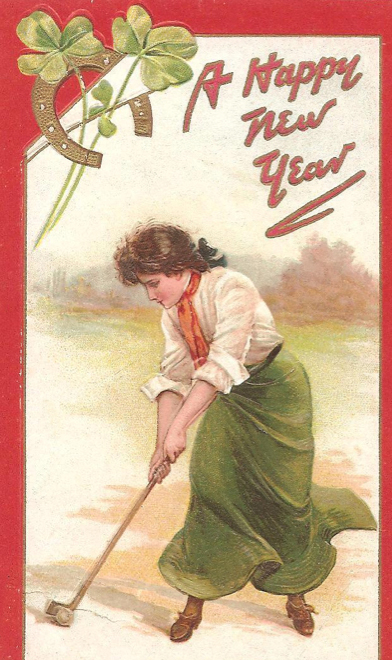 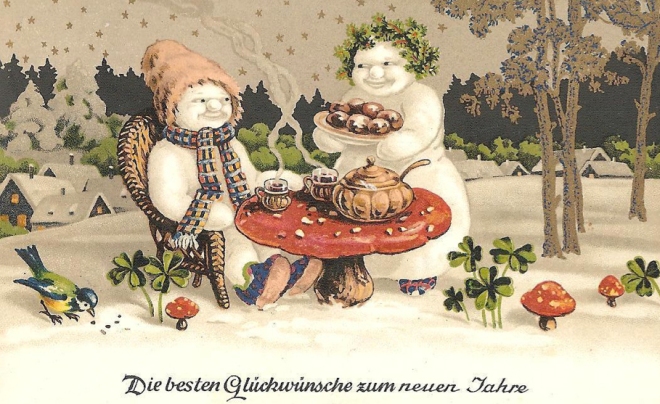 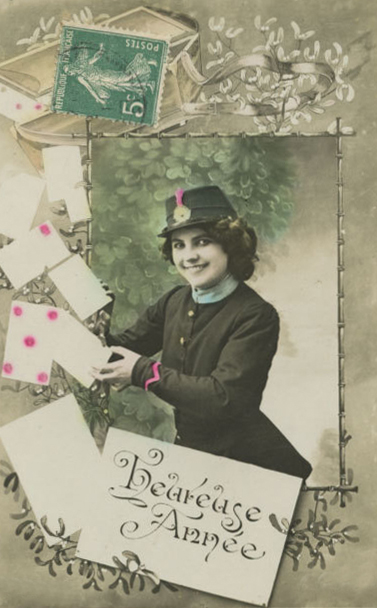 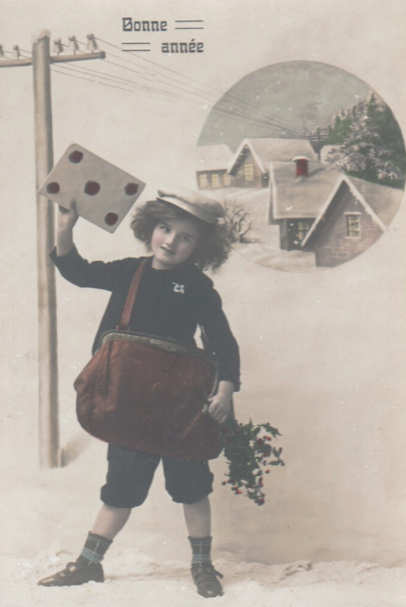 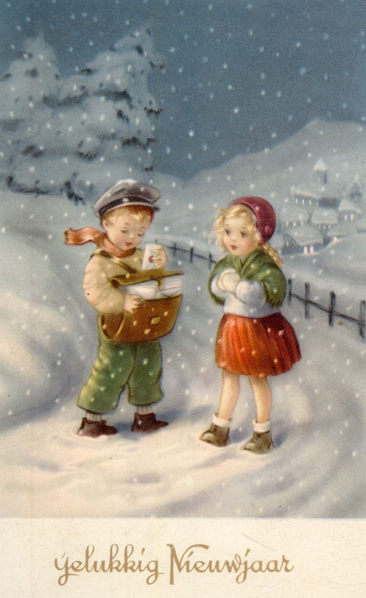 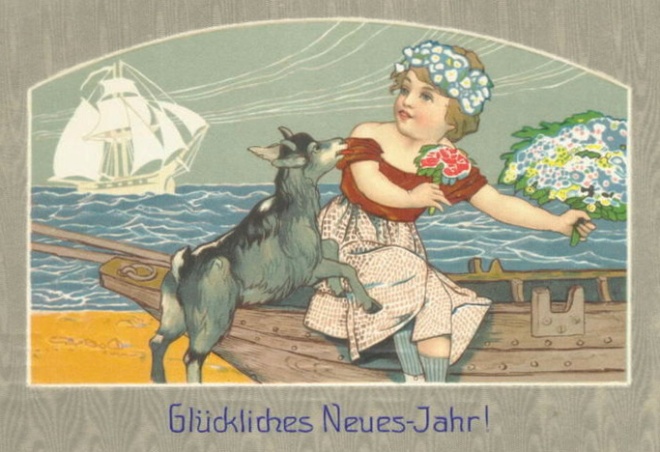 A bit of Leavenworth Jackson art found in an old photo album. A lovely surprise for me. 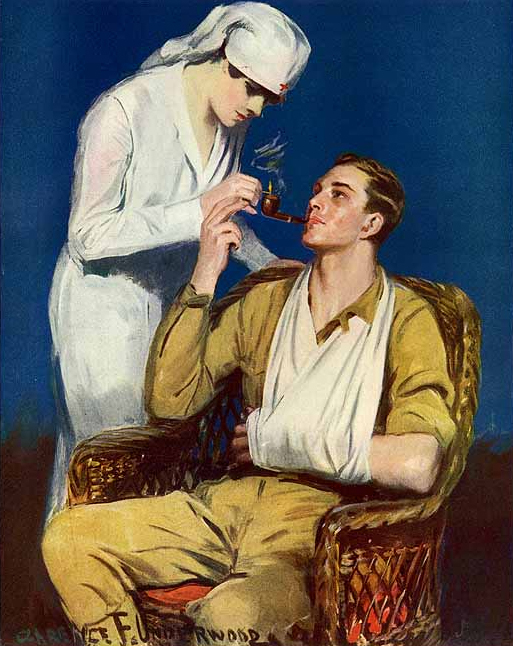 While I’m on Clarence Underwood, how about this appeal for the “Our Boys in France Tobacco Fund”? Who could say ‘no’ to writing like this: “A soldier or sailor craves tobacco. A smoke cheers his lonely days and nights in the trenches or aboard ship; home and friends loom up in the fragrant puffs… Even if you object to tobacco personally, think of those who long for its comforts and let your contribution come without delay.” 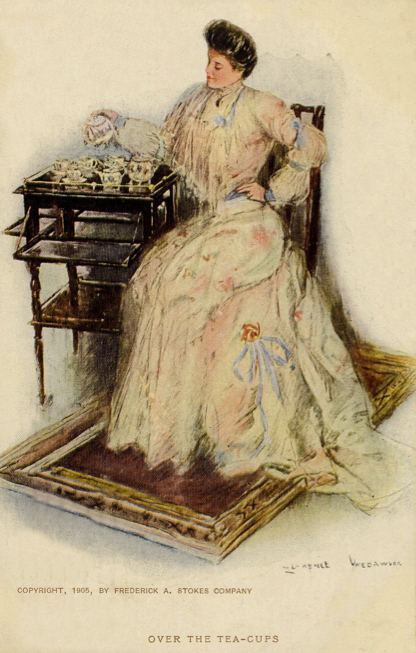 Postcard by Clarence F. Underwood (1871-1929). Born in Jamestown, N.Y., he studied at the Art Students League and the Academy of Julian in Paris with J.P. Laurens, Jean-Joseph Benjamin-Constant and William-Adolphe Bouguereau. Back in the states he became a leading illustrator, creating art for posters, novels and magazines such as The Saturday Evening Post and Ladies’ World. 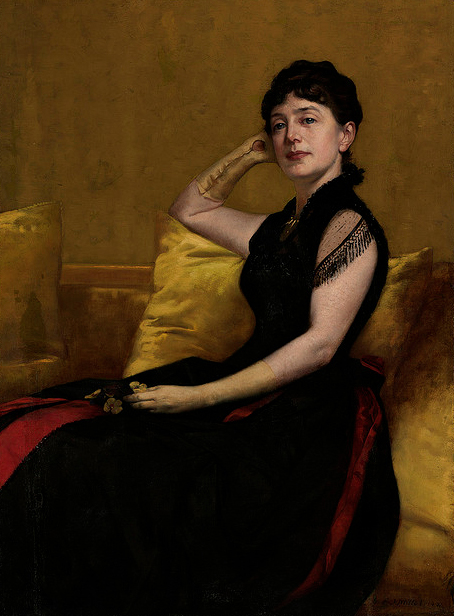 “What would become of the wilderness without flapjacks? They are the beginning and the end of all things; they are the game by which we live and move and have our being. He who has experienced the joys of flapjacks and maple sirup, has not lived in vain. The two combined are enough to put one in a good humor without original sin. Suppose we do eat everything off the same plate, suppose we are reduced to two-pronged forks, and our blouses for a napkin, what matters it, if we are happy? And we are happy. The recollection of those flapjacks endures until the next meal, when we renew our attentions with the ardor of a lover whose inamorata is good enough to eat!”

–Kate Field “In and Out of the Woods” a piece about her time in the Adirondacks, in The Atlantic Almanac for 1870

Kate Field (1838-1896) was a journalist, travel writer, lecturer, singer, actress, playwright, woman of business, publisher of a weekly newspaper, and social reformer. In addition to writing for newspapers such as the Boston Post, Chicago Tribune and the New York Tribune, she championed many causes, including the preservation of John Brown’s farm and burial place, greater rights for women, temperance (as opposed to prohibition), a memorial theater for Shakespeare in Stratford, England, and the exposure of the Mormon church’s disregard for U.S. law and authority in Utah. Her friends and admirers included Charles Dickens, Robert and Elizabeth Barrett Browning, Anthony Trollope, George Eliot, Alexander Graham Bell, and Henry James, who used her as a model for Henrietta Stackpole in The Portrait of a Lady (1881).

This painting of Kate Field is by Francis Davis Millet (1846-1912), first shown at the 1881 exhibition of the National Academy of Design in New York, and today in the collection of the Boston Public Library. Millet, a friend of Ms. Field, died at the sinking of the Titanic. 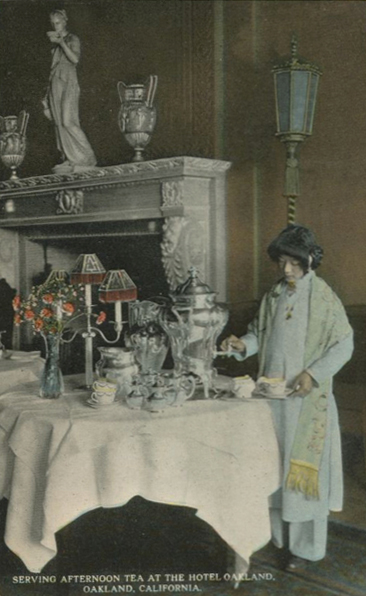 William Terzian dreamed of building bridges. Born in Armenia on December 12, 1912, he was brought to the United States by his parents in 1923, as they fled the Armenian genocide. William Terzian grew up in New York City and attended Brooklyn Tech, where he began his engineering studies. But his talent for photography was recognized, and what began as a hobby took his life in a new direction.

Terzian found one of his favorite photographic subjects when he traveled north in New York to the Adirondack mountains and Lake George. In 1933, he first visited Silver Bay. The main body of his Silver Bay photography, such as the photo above, was taken in the summers of 1935 and 1936.

In 1943, Terzian and his wife Violet moved to Manhasset, Long Island, and began a photography business together. ‘Terzian of Manhasset’ specialized in portraits of children, class pictures for public and private schools, and weddings. As his business thrived over four decades, he found himself taking pictures for second and third generations of his customers.

As you might gather from the neat lettering of his name on this Terzian postcard, he was a perfectionist, a photographer who went to great lengths to get the shot right. His postcards, all in black & white or sepia tone, are beautifully composed and photographed. Many were published by the Collotype Company of Elizabeth, N.J. Terzian also printed real photo postcards himself. Among my prize possessions are a published black & white image of Slim Point at Silver Bay and a real photo postcard taken minutes later while the camera was in the same position.

My Terzian postcards are postmarked 1941-1947, and one I own suggests why Terzian did not remain Silver Bay’s postcard photographer for the length of his career. On the back, a young woman named Anna writes, “Wished had it colors.” William did not shoot color, and in the late 1940s, he found himself being replaced as Silver Bay’s postcard photographer by Richard K. Dean from Glens Falls, who shot color photography for glossy chrome postcards all over the U.S.

But this was not the end of William and Violet Terzian’s relationship with Lake George. Their children spent summers at Silver Bay, and their daughter, Jacqueline, served as an Emp and an editor of Baylights, the Silver Bay Association’s yearbook. William and Violet had a summer home two miles south of Silver Bay, near Tongue Mountain, and they retired there in 1985. William Terzian died in 1987, after a lifetime of building bridges for memories.