“If you have the misfortune to be caught out in a bit of rough weather, do not be flurried. If your destination lies to windward — the direction from which the wind blows — pull hard, feather high, and try to get the protection of the nearest land that keeps the wind off the water. If you find the wind and sea rising so that you can’t make any headway, and are in danger of shipping so much water that you will be swamped, give up trying to make your destination and resign yourself to the inevitable, which is landing on the shore opposite the one you wish to reach. That’s not pleasant, but it is much better than drowning.”

“The world is not respectable; it is mortal, tormented, confused, deluded forever; but it is shot through with beauty, with love, with glints of courage and laughter; and in these, the spirit blooms timidly, and struggles to the light amid the thorns.” — George Santayana

My thanks to Phil Grisé and Gregg Kemp

When I was in the Air Force, stationed at the Presidio of Monterey, I began reading the San Francisco Chronicle. I was especially drawn to the columns of Herb Caen, the surreal world of the society pages, the short pieces about odd incidents (“Worker Felled by Dead Tuna”), and especially the suicides off the Golden Gate Bridge. Each jump, each individual, was unique, and the Chronicle always seemed to find a salient point that made me gasp or ponder. I still recall the hapless suicide who missed the water, crashing instead through the deck of a passing boat. In my time as a Chronicle reader, Golden Gate Bridge suicides numbered in the 400’s, and each suicide was identified by number. In 1995, during my time as a New York Times reader, I found an article by Jeff Stryker, “An Awful Milestone for the Golden Gate Bridge,” which talked about the number approaching the 1,000 mark.

I say all this in preface to a comment on Eric Steel’s film, The Bridge (2006) which I saw for the first time this week. In 2003, Steel read a piece in The New Yorker, “Jumpers” by Tad Friend. Steel was so taken that he moved from New York to San Francisco, hired film crews, and during 2004, he filmed the bridge from several angles, all day long, all year long. He documented 23 of the bridge’s 24 suicides. (The film crews always called 911 when they saw any suspicious behavior, and a number of the people they observed were talked out of jumping. Others simply gave the authorities no time, or jumped after assuring everyone that they were only out for a walk.) Steel also interviewed the friends and family of six of the jumpers, as well as a young man who had jumped and lived.

The film was greeted with gratitude in some quarters and horror in others — gratitude for raising awareness of the issue and showing the pain of the survivors, and horror by those who viewed The Bridge as little more than a snuff film.

Personally, I think it’s one of the most remarkable films I have ever seen. Yes, if you have any feelings at all, it is horrifying. When the first man clambered over the rail and leaped, I was stunned; this was real. At times you are looking at a picture postcard shot of the Golden Gate, thinking it beautiful filler before the next interview, and suddenly there is a splash. Someone, out there in the distance, has just died.

Yet when a family is being interviewed, telling about how their son planned his suicide and bought a ticket to San Francisco, talking about how helpless they felt, about how they have second-guessed themselves endlessly, wondering what they could have done… the entire time, their little brown dachshund is migrating from lap to lap to be petted, on his back in one shot, burrowed between legs in another, and we see life going on. The Bridge doesn’t have an answer; it just asks the questions as eloquently, as powerfully, as anything I have ever seen before.

“If more of us valued food and cheer and song above hoarded gold, it would be a merrier world.”

Pinhole photographer Gregg Kemp has alerted me to the National Krappy Kamera Competition, an annual juried show of photos made with cheap cameras, i.e., those with a plastic lens or no lens at all. I am fascinated by art that starts with limits, like writing a haiku or making a picture with a bag of nails, and the extraordinary beauty that people can create within those limits. The image above is by Tootie Nienow of Santa Ana, California. You can see all of the photos, including an aeronautical marvel by Gregg, hosted at the Soho Photo Gallery website.

“I feel sorry now for members of the companies with which I used to tour. In those days when I was really famous I didn’t have the nerve to walk around the streets alone for fear of being bothered and robbed of the relaxation I was seeking. So friends would escort me on my wanderings. When I was on tour in Victoria Regina everyone treated me offstage as though I were still a queen. They behaved like courtiers trying to keep me happy. But I learned after I had worn out several good friends, that the cast had met in solemn conclave to parcel me out: ‘You walk her Tuesday, and I’ll walk her Wednesday.'”

I used to watch “My Little Margie” with my grandmother and cousins, and Grandma would say, “Oh, Charles Farrell” every time Gale Storm’s TV father appeared on the screen. I had no clue as to why, until last week when I came across this photo of Janet Gaynor and a young Charles Farrell in Seventh Heaven (1927). Oh my. 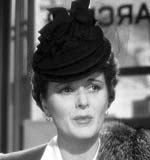 As much as I love watching The Maltese Falcon (1941), I could never see how we were supposed to find Mary Astor’s Brigid O’Shaughnessy to be attractive, much less irresistible, or how Bogart’s Sam Spade was supposed to fall for her, if only for a day or two. I always found her character to be frosty, as tightly pinched as her hairdo, as odd as her hat. And Astor was only 36, I believe, when the film was made; it’s as if the people in makeup and wardrobe were conspiring against her. Then I stumbled across an image of Astor from an earlier film; ah, this was a woman to kill for.