Sometimes when I am reading, a passage of prose is so beautiful I have to stop, let the story wait, and read the passage again, perhaps even aloud, just for the pure pleasure of it. So it was the other evening when I was reading Blackbeard: Buccaneer by Ralph D. Paine. 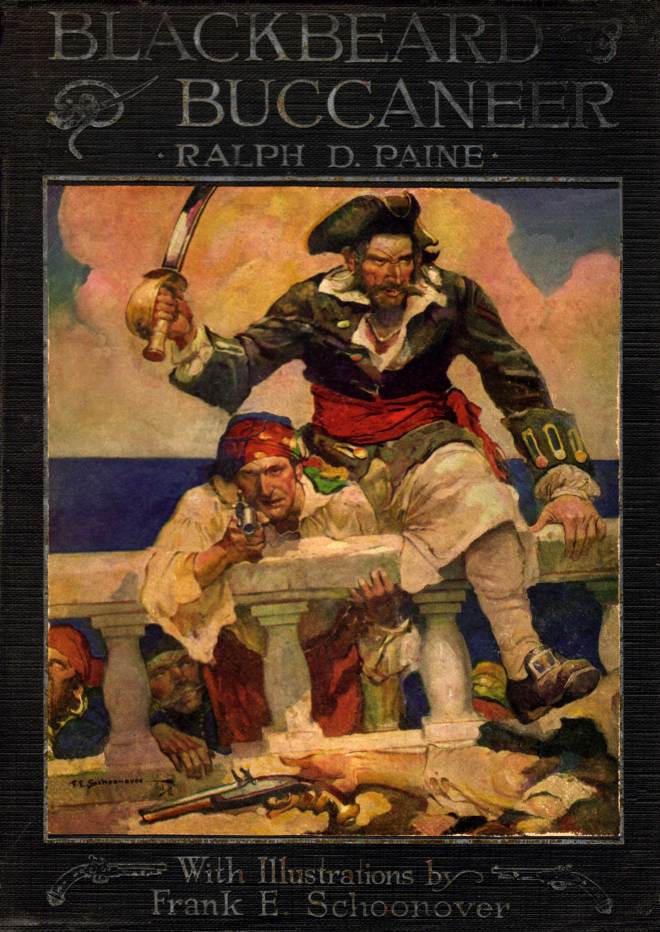 I’ll freely admit it; I bought the book for the illustrations by Frank Schoonover; I love pirate books. But Ralph D. Paine has been one of the great and good surprises of my reading life; he is surely one of the most under-appreciated authors of the 20th century, probably because he wrote “boy’s books,” adventures for young men, and not “serious fiction.”

But consider this passage:

“While they were thus engaged, two pirates came flying down the ladder from the poop deck into the main cabin. They revolved like windmills in a jumble of arms and legs. Close behind them, in a manner more orderly came Captain Jonathan Wellsby who had tossed the one and tremendously booted the other.”

“Then Jack heard two voices in grunts and maledictions. Fearing the enemy might have tracked him, he stood as still as a mouse in the leafage of the oak. Out of the swamp emerged a young man with a musket on his shoulder. Behind him came one very much older gaunt and wrinkled, his hair as gray as the Spanish moss that overhung his path.”

Lovely stuff, well worth reading aloud, and the author’s life was as much of an adventure as any of his stories. Ralph Delahaye Paine was born in 1871, and earned enough money as a lad to send himself to Yale, where he rowed on the crew team and was tapped for Skull & Bones. Serving as a war correspondent, he covered the Cuban Revolution of 1896 with his friend Stephen Crane; ever enthusiastic, the pair ended up smuggling arms and helping to sink a Spanish warship. When the Maine was sunk in 1898, Paine returned to Cuba as a correspondent to cover the Spanish-American War in a slightly less participatory fashion. In 1900 he went to China to report on the Boxer Rebellion, and in 1917 he covered the U.S. Navy’s action in World War I. Between wars, he made time to edit magazines, write articles and publish more than 40 books of college stories, adventures and naval history. Paine died in 1925, having packed an amazing life into just 54 years.

Ralph Delahaye Paine upon his graduation from Yale in 1894, and in 1922

At the end of his autobiographical Roads of Adventure (1922), he wrote:

“The pile of manuscript on my desk had been steadily growing in bulk, but I was wondering whether it ought not to include such stories as ‘The Spinster Ladies in Search of Pirates’ Gold,’ and ‘How Jordan was Kidnapped in Nagasaki,’ and ‘Why Jack Teal Bit off the Sheep-Herder’s Ear.’ Providentially one of my twin sons, aged eleven, sauntered to the desk and inquired, in a skeptical manner:

‘Do you expect people to read all that?’

‘Well, my son, we are always hoping for the improbable to happen.”

And so it has. Thank you, Ralph. You’re still being read.

Thanks to Quarter-Century Record, Class of 1894, Yale College (1922), Frederick Dwight, editor; Blackbeard Buccaneer (1923) by Ralph Delahaye Paine; and my sincere thanks to Katie Delahaye Paine, for taking the time to correspond with me about her remarkable grandfather.

“There are few things better for our mental health than laughter. A balanced dose of steam-letting irrreverence and taboo-busting satire keeps a society sane. Nor is it the transcendent power of big bands, high kicks and dazzling scenery to be sneered at. In the pursuit of changing the world, there is still room for sheer mood-lifting, brow-soothing entertainment. The trouble starts when it takes up too much room. Sit Back and Enjoy It is great as a part of a varied diet; on its own it can degenerate into Lie Back and Let It Wash Over You While We Numb Your Mind.”

— Harriet Walter in Other People’s Shoes: Thoughts on Acting (1999)

“On the 12th of February our most valuable capture was made–perhaps the most valuable taken by a Confederate cruiser during the war. We sighted this vessel about eight in the evening, but not until ten o’clock did we get near enough to give her a shot from our bow pivot, and even this fell considerably short. 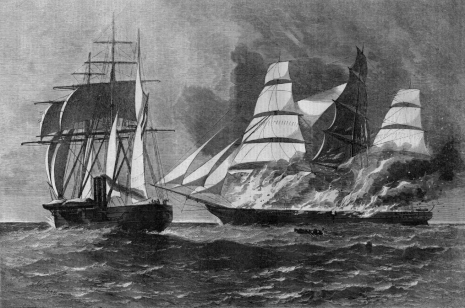 “She rounded to, however; and as she lay thus, with black hull, gilt streak, scraped and varnished masts, and snow-white sails, there was a general exclamation of admiration, coupled with regret that such a thing of beauty must be destroyed. She proved to be the clipper ship Jacob Bell, from Foochow, bound to New York with a cargo, mostly tea, valued at upward of a million dollars.”

— G. Terry Sinclair, Midshipman, C.S.N., in “Confederate Commerce-Destroyers: The Eventful Cruise of the ‘Florida’ ” in The Century Magazine, July 1898; image of the Jacob Bell in flames from Harper’s Weekly, March 21, 1863; the ship’s cargo was actually tea and silk, and worth approximately $1.5 million.

Mr. Clete, my first and best dog, once spent the night in the studio of Adelaide Alsop Robineau, the legendary ceramic artist. He slept not far from where her handmade tiles surrounded the fireplace.

I was reminded of this when I took in the “Turner to Cézanne” exhibit at the Everson Museum of Art in Syracuse. My favorite parts of the show were the picture frames and the photographs of the Davies sisters who collected the art. Afterward I visited the Everson’s ceramics collection, and was drawn, as always, to the Robineau pieces. 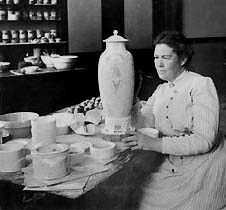 The remarkable Scarab Vase, of course, but even more so the Viking Vase and the Crab Vase, which seem to me to be alive.

And then I remembered Mr. Clete’s night in Adelaide’s studio.

I was traveling, and a friend was taking care of Mr. Clete; he was the kind of polite, quiet dog you could farm out without fear of the friend saying, “Never again.” And I loved Mr. Clete too deeply to put him in a kennel. On this occasion, the designated dog sitter was my dear friend Toni, who hosted Mr. Clete at an apartment on Robineau Road on the west side of Syracuse. The apartment was in what used to be Adelaide Robineau’s studio, and there Mr. Clete communed with her spirit. Being a humble and unaffected individual, he never brought up his brush with fame. But I knew, and revered him all the more for it.

While on another errand, I came across a 1907 letter by Henry Adams to a friend, Mabel La Farge, that mentioned British author Elinor Glyn’s latest novel:

“ ‘Three Weeks’ is the title of Mrs. Glyn’s new purple volume, and the ladies are screaming with laughter at it. I have it, but I guard myself from reading.”

One hopes that Adams relented. Glyn’s novel, while torrid and florid,  is still delicious reading today. It begins with a young English aristocrat who is sent to Europe to get over the vicar’s daughter, a tall girl with big hands. There he falls into the clutches, or clinches, of a more petite creature whose blood runs both royal and hot. The innocent lad hasn’t a penguin’s prayer of retaining his virtue. A picnic finds him thus:

“Paul could hardly speak, he buried his face in her lap, like a child, and kept it there, kissing her gloved hands. His straw hat, with its Zingari ribbon, lay on the grass beside him, and a tiny shaft of sunlight glanced through the trees, gilding the crisp waves of his brushed-back hair into dark burnished gold.

“The lady moved one hand from his impassioned caress, and touched the curl with her finger-tips. She smiled with tenderness a mother might have done.

” ‘There–there!’ she said. ‘Not yet.’ Then she drew her hand away from him and leant back, half closing her eyes.

“Paul sat up and stared around. Each moment of the day was providing new emotions for him. Surely this was what Columbus must have felt, nearing the new world.”

Land ho! And then on to the infamous Chapter Six, where in her chambers the lady reclines on a tiger skin,

“… garbed in some strange clinging garment of heavy purple crepe, its hem embroidered with gold, one white arm resting on the beast’s head, her back supported by a pile of velvet cushions, and a heap of rarely bound books at her side, while between her lips was a rose not redder than they–an almost scarlet rose. Paul had never seen one as red before.”

At this point, Glyn resorts to tasteful asterisks followed by symbolism:

“And outside the black storm made the darkness fall early. And inside the half-burnt logs tumbled together, causing a cloud of golden sparks, and then the flames leapt up again and crackled in the grate.”

For this, the novel was banned in Canada, where, in 1907, a fire was meant to be a fire by gosh, nothing more, nothing less.

The good Mrs. Glyn eventually made her way to Hollywood where the American film industry loved the way her mind worked. In her 1927 novel It, she used “it” to describe a personal quality which draws others as if by magnetism, a definition quickly shortened to signify sex appeal.

The star of the film version, Clara Bow, became “the It Girl,” an appellation thought fitting by everyone except Dorothy Parker, who wrote, “It, hell. She had Those.”

Elinor Glyn was said to be great fun at a party, which is how she came to be on William Randolph Hearst’s yacht in 1924 when producer Thomas Ince died mysteriously, a voyage one can catch in the 2001 film, The Cat’s Meow, in which Glyn is portrayed by Joanna Lumley, who gives you a glimpse of what wonderful company she must have been.

Elinor Glyn died in London in 1943, having lived long enough to see her novels go from scandalous to old-fashioned. But she was a cultural force in her time, and her work is still in print, still giving readers pleasure.

A watercolor sketch of letter-writer Henry Adams with his dog, by one of his many correspondents, Mabel Hooper La Farge, 1917, from the collection of Harvard University. 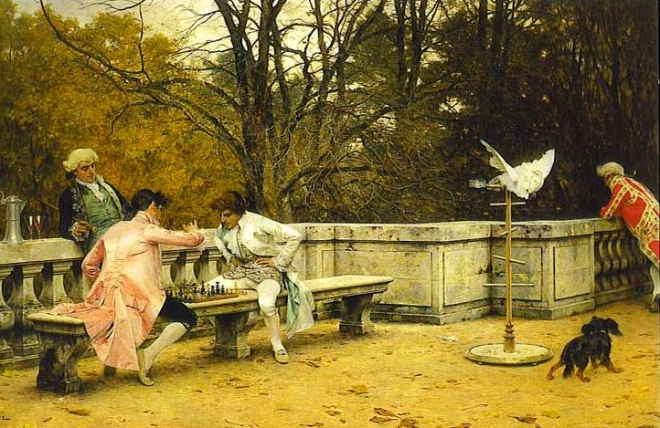 I really cannot get enough of these. Again, my thanks to Tableaux ayant pour sujet les échecs which cries out for your visit.

“The great English sports are pursued almost as fiercely by sedentary men who cannot sit a donkey, and by quiet women who cannot drown a mouse, as by the booted and spurred. They hunt in imagination. They follow the fortunes of the Berkeley, the Cattistock, the Quorn, and the Belvoir upon phantom hunters. They roll upon their lips the odd-sounding, beautifully crabbed English place names — Humblebee, Doddles Hill, Caroline Bog, Winniats Brake. They imagine as they read (hanging to a strap in the Underground or propping the paper against a suburban teapot) now a ‘slow, twisting hunt,’ now ‘a brilliant gallop.’ The rolling meadows are in their eyes; they hear the thunder and whimper of horses and hounds; the shapely slopes of Leicestershire unfold before them, and in imagination they ride home again, when evening falls, soothed and satisfied, and watch the lights coming out in farmhouse windows. Indeed the English sporting writers, Beckford, St John, Surtees, Nimrod, make no mean reading. In their slapdash, gentlemanly way they have ridden their pens as boldly as they have ridden their horses.”